Look outside of the classroom

Recently, a friend responded to my blog post on curriculum integration, asking two important questions- Where do I begin? And, how do I naturally pique curiosity for the purpose of having my students ideate, design, and engage in real-world problem solving? This blog post will attempt to answer these questions by looking at Place-based education as a starting point for meaningful inquiry.

In 2018, I first read about place-based pedagogy while enrolled in a course with Dr. Sheliza Khan. It was while reading David Gruenewald’s research on critical pedagogy of place, when I realized the importance of contextualizing learning based on place, to provoke student thinking and action. According to Gruenewald, “People will tend to reflect on their own “situationality” to the extent that they are challenged by it to act upon it. Human beings are because they are in a situation. And they will be more, the more they not only critically reflect upon their existence but critically act upon it.”

This idea connected beautifully to the September 2014 episode of CBC’s The Current when Dr. Sheliza Khan mentioned, “I try to get my students to think of Science in the community. When we look at the Science that exists in our community, students begin to develop and question. I feel that this is difficult because you have to step out of the classroom and into the community, but the students light up because they begin to make meaningful discoveries.” These meaningful discoveries are ones that students see first-hand for themselves rather than from a scenario presented in a text book. These discoveries are open-ended, prompting question after question, which in turn will serve as a foundation for a meaningful inquiry and curriculum integrated task.

In Beyond Ecophobia, David Sobel (1996) advises that ecological place-based education begins when students first develop a connection with the natural before attempting to provide solutions and heal any wounds. According to Sobel, most environmentalists attributed their [political] commitment to many hours spent outdoors in a keenly remembered wild or semi-wild place in childhood or adolescence, and an adult who taught them a respect for nature. The values and motivations of ecologically motivated adults, therefore, stem from these experiences in childhood – ones that often took place in nature or in their communities.

I have extracted salient ideas from David Sobel’s 2004 book, Place-based education: Connecting classrooms and communities for the purpose of visualizing the aims of this approach: 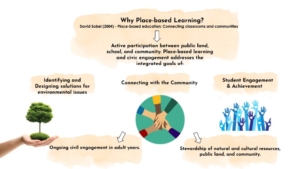 In addition to this, I have included a video (created as part of a curriculum course at OISE) that could serve as a great starting point for students to reflect on their surroundings and identify potential concerns. In my opinion, a video such as this, that encourages students to look at their environments closely, may elicit a variety of rich inquiry questions and from there, inspire students to take action.

From this video, I express many wonderings from a simple walk-through of my day. While there are so many problems yet to be solved, I remain hopeful that my students may be the problem solvers of these issues one day. Now, how cool is that thought?